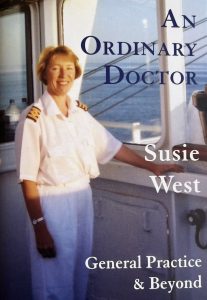 Paul Hepple is a GP in  Edinburgh

I suspect many GPs think of themselves as ‘ordinary’ or ‘good enough’ doctors, but most of us will have some unique or unusual aspects in our journey to becoming a doctor, or significant events which have occurred since qualifying. The author of this fascinating memoir, now a retired GP, is quite extraordinary.

Susie West writes both eloquently and poignantly about her life. She begins with the memory of the first dead body she saw, aged 14, that of her father who died from heart disease aged 52. However, her memory of the event showed her that death can be both peaceful and calm and that a dead body was nothing to be afraid of.

Seeing women trying to access abortions, and the hardships they endured, cemented her belief that women really need to be in charge of their own bodies and her interest in family planning.

Although she started training to be a nurse, she quickly realised that if she spent her life as a nurse telling a doctor what he needed to do it would be a very frustrating career. She managed to get a place at The Middlesex Hospital Medical School in 1973

Her elective in Obstetrics & gynaecology at Calcutta Medical Hospital had a huge influence on her later choices and views. Seeing women trying to access abortions, and the hardships they endured, cemented her belief that women really need to be in charge of their own bodies and her interest in family planning.

I’m lucky to work in a practice that still has three GPs over the age of 60 one who is now 70 years old and still thoroughly enjoying work. They remember GP training in the 70s and early 80s as quite unstructured and generally just requiring the signature of a trainer to qualify. Susie describes the feeling of isolation in her first GP training post which led her to look into her friend’s suggestion of having a break and becoming a cruise ship doctor.

Although she did go back to complete her GP training, she returned to work aboard cruise ships. By chance she was on board the SS Canberra when the Falklands conflict began in 1982. The Ministry of Defence requisitioned SS Canberra to become a troop ship and after a quick conversion its capacity was doubled to be able to carry 3000 troops. Susie managed to persuade one of the Naval medical officers to allow her to remain aboard and join the Naval medical team. Women were generally not allowed by the Navy to go to sea until 1990.

How description of being on board SS Canberra during the Falklands conflict is perhaps the most gripping part of her book. Combining both fear and excitement but also a sombre account of the physical and psychological cost that resulted from the conflict. During the return journey to Britain she helped with running group therapy sessions, called decompression, for anyone who wanted the chance to talk about what they’d seen and how they were feeling about it.

Susie did go on to have a more conventional career once she had children, working as a GP for over 20 years in Chingford, Essex. However, she combined this with her interest in family planning and also as a forensic medical examiner for the police. She also continued her involvement with the Royal Navy working as a reserve.

One story she recounts is of her investigation by the GMC, which should make most doctors shake with anger.

One story she recounts is of her investigation by the GMC, which should make most doctors shake with anger. Whilst working as a forensic doctor she examined a rape victim and subsequently gave evidence that led to the prosecution and guilty sentencing of the rapist. She tells us how the rapist, once in jail, made a complaint about her to the GMC. He claimed that she had been prejudiced against him. Instead of quickly investigating and dismissing the issue, the GMC took 2 long years before saying without any hint of apology that there was clearly no case to answer.

She finishes her book with a discourse on what is going wrong with general practice and the NHS and a few suggestions as to how to help rectify this. This is a beautifully written book, enhanced by photographs, which many readers will find inspirational.

What makes a public health problem?

There is an enormous body of information on diet and nutrition, but how do you know