Paquita De Zulueta is a recently retired GP, Honorary Senior Clinical Lecturer at Imperial College, and past volunteer for Doctors of the World London Clinic. She is on twitter: @PdeZ_doc

With the recent Russian invasion of Ukraine leading to hundreds of thousands of involuntarily displaced* desperate Ukrainian citizens, the main theme of this book is poignantly relevant. But the displaced here, whilst also fleeing war and violence, are from non-European countries, and seem to be given a less welcoming reception.

…the displaced here, whilst also fleeing war and violence, are from non-European countries, and seem to be given a less welcoming reception…

In sparse and subtle prose, we follow Richard, a recently retired East German Professor and childless widower, clearly lonely and rather adrift, who becomes curious, then fully engaged with a group of African asylum seekers whom he first notices in a square, camped in makeshift tents and on hunger strike. Their stories of escape are harrowing (and I suspect true). They want to live and work in Germany, but they are kept in limbo, living in squalid, functional accommodation, unable to work, their hopes and energies sapped, leading to many of them languishing in their dormitory beds, closed off from the external world. We witness the crushing of their aspirations and ambitions as they face the grinding indifference and Kafkaesque bureaucracy of a state determined to keep them out. Logical and practical, Richard cannot understand the insuperable and absurd barriers preventing them from working, even when they possess high level skills needed in Germany. After an interview with an owl-like lawyer, he concludes that the lawyer has “flapped his way from some previous century into the twenty-first, this new and yet already so old century with its endless streams of people who, having survived the passage across a real-life sea, are now drowning in rivers and oceans of paper.”

With a light touch, yet penetrating insight, the author reflects on human themes including loss, displacement, prejudice, companionship, betrayal, fortitude.

With a light touch, yet penetrating insight, the author reflects on human themes including loss, displacement, prejudice, companionship, betrayal, fortitude. From his closed-in state, we witness Richard breaking away from his solitary rituals and thawing like the frozen lake close to his home. The lake is often referred to, as well as the mystery of the drowned diver who lies somewhere in its depths – an allegory for the ‘invisible people’ in his country or buried, unwanted memories? Richard develops friendships with these men and takes up their cause. He reads up and also learns directly from them about their countries, their histories, their religion. He is attracted to the beautiful Ethiopian teacher – an unrequited infatuation. Richard can empathise with their involuntary dislocation – he also felt displaced when suddenly he was ‘a citizen of another country’ after the fall of the Berlin wall. He discovers how some of his close friends are prejudiced and intolerant – unwilling to take up his cause.

He also notices how borders can suddenly arise where a border never used to be and eloquently expands on the theme of polarisation when he witnesses a huge number of policemen in full riot gear lined up to forcibly remove twelve recalcitrant asylum seekers (his new friends) from their temporary home. 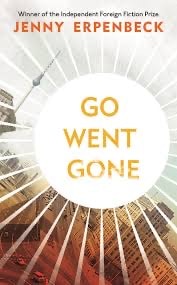 “And are the two groups of people facing off here something like the two halves of the universe that actually belong together but whose separation is nonetheless irrevocable? Is the rift between them in fact a bottomless chasm; is that why such turbulences have been released?”

There are touching scenes such as when he teaches Osarobo to play the piano, or hilarious ones such as when he drives a group of them to his home and, crammed in his car, they bellow a catchy German tune to the shocked amazement of a family in a nearby car. Or there is the unexpected, when Richard accompanies Karon to a shop where an African woman with disheveled hair takes Richard’s money and places it in a steaming crevice. Bewildered, Richard observes Karon accept a couple of numbers (scrawled on a piece of chewing gum paper) to telephone to his mother in Ghana. With these she will buy a house in his village. No SWIFT interbank system needed here…

The story also dwells on memory. Richard has a conversation with Rashid – who wishes he could ‘cut off’ his memory. Even his wonderful life with his family cannot console him as they are bound up with pain and loss. Richard muses:

“A life in which an empty present is occupied by a memory that one cannot endure, in which the future refuses to show itself, must be extremely taxing… since it is a life without a shoreline, as it were”.

At the end there is a final twist, a revelation.

This is a thought provoking, humane and engaging book which I highly recommend. Despite the sad and poignant topic, it contains amusing, touching and uplifting moments and is an enjoyable and worthwhile read. For those who care for patients seeking asylum, it will carry a particularly powerful resonance, and represents a valuable addition to the growing literature on displacement and asylum.

Breaking the silence around ‘the menopause’