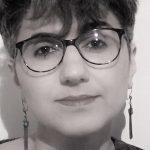 Roghieh Dehghan is an an academic GP in Islington, born in Iran and educated in Austria. Her research focuses on trauma, mental health, race, and gender.

‘The utter incapacity of every man truly to share in suffering which he cannot see,’ is a quote from Albert Camus’s The Plague that has accompanied me throughout my life as a question rather than a statement. How do we imagine a pain we have never suffered ourselves? – I am still asking myself.

Imagination is indeed the key word here. Imagination as an essential and powerful tool of transformation has been stressed by thinkers, artists and activists throughout our history. Seeing, knowing, loving and seeking justice are all functions of imagination. And by the same token, imagination is a function of language.

‘The utter incapacity of every man truly to share in suffering which he cannot see….

Once we accept the reality of racism, then we can start imagining more. We start imagining how, in recent years, our government’s hostile rhetoric and policies toward migrants have denigrated our BAME colleagues in the eyes of the very public they serve day in and day out. We may then imagine how our BAME colleagues struggle to maintain a sense of dignity and presence in their work, how they show up with care and respect when it is denied to them – not only outside the doors of their clinics but also within the NHS itself.

Once we accept the reality of racism, then we can start imagining more.

Once we have imagined all of that, then we may ask deeper, more unsettling questions. We may ask whether our NHS leaders need to muster a more robust and decisive opposition to unjust and divisive policies. We may also ask whether our official workplace language around racism is fitting. I am not referring to the term BAME, which, as inadequate as it may be, creates a sense of unity, solidarity and therefore power for a very diverse and marginalised group. I am questioning, however, the effectiveness of terms such as ‘unconscious bias’ and Equality, Diversity and Inclusion (EDI).

Language determines how we perceive and investigate an issue, where we locate problems and put our focus, and how we ultimately intervene. Unconscious bias and EDI locate the problem in individuals rather than systems. For example, while the senior leaders of Royal College of General Practitioners (RCGP) demonstrate nuanced insight, commitment and courage in their BJG open issue article, I feel weary of their reference to representation, diversity and inclusion. Their article also refers to a Cambridge publication on Equality and Diversity that suggests training for ‘people from under-represented groups to help them overcome disadvantages in competing with other applicants.’ While I welcome support and mentorship for my BAME colleagues, what they are truly lacking is not another skill set—as nearly every one of their CVs can attest.

Language determines how we perceive and investigate an issue ….. and how we ultimately intervene.

There are three problems with the current terms our NHS leaders and thinkers utilise to articulate racism.

First, when systemic racism is of such a degree to produce morbidity and mortality, there is no time for deflecting terminologies. “Unconscious bias” doesn’t do justice to trauma experienced by the BAME community. On the one hand, there are the everyday and cumulative trauma of micro-aggressions that undermine confidence and one’s sense of worthiness. On the other hand, racism carries an undeniable threat to all kinds of prospects in life, including hindering professional progress – for example, employment and contract negotiations in General Practice lack transparency and are plagued by nepotism. Primary care is a special case, as your employer is also your colleague whose reference your career depends on. These uneven playing fields become breeding grounds for exploitation of BAME doctors.

Further, words induce moods and summon actions. How we articulate a problem mediates our response to it. When oversimplified terms such as ‘unconscious bias’ and ‘EDI’ are used to articulate the cause and response to systemic racism, we misrepresent a socio-political and historical construct as a psychological and managerial issue. Interventions such as diversity, inclusion and representation have become cosmetic measures and meaningless tokens that solidify institutionalised racism; these empty strategies threaten to turn into visible counterarguments that silence deeper challenges to racism (such as, ‘Look, our leader is brown or black. Look, we have an EDI officer; we are therefore, by default, not racist’).

We misrepresent a socio-political and historical construct as a psychological and managerial issue.

Most importantly, this language dismisses the responsibility and accountability of white and privileged groups within the NHS – it fails to address white privilege. In the above example, a training intervention for BAME colleagues was put forward, but why? Why burden BAME doctors with more education to make them ‘good enough’? The uncomfortable issue we are circumventing is that our white and white – identifying colleagues must do their long overdue work. They need to recognise that race applies to them too, and to acknowledge those who are paying the cost of their white privilege. They need to know that one doesn’t need to be racist or even white to benefit from white privilege. We all need to awaken to how racism has resulted in the epistemic overconfidence of the white and the internalised racism of our BAME colleagues. This is the kind of training that the NHS must implement—educational programs that target the root cause of racism in a genuine effort to address the invisible but ubiquitous effects of institutionalised white privilege.

Our white and white – identifying colleagues …. need to recognise that race applies to them too.

In short, BAME doctors’ ‘not being good enough’ for that chair at the big table is as much a manifestation of systemic racism as their white counterparts’ sense of entitlement to the spaces of power they occupy.

I recognise that cultural changes are inconvenient and arduous, but I am also eager to see those vital changes pursued in earnest. It is true that racism is a difficult and sensitive topic. Unconscious bias and EDI may therefore be argued as the best operational models to steer this gigantic issue, compared to racism, which will be perceived as confrontational. It is also equally true that the sentiments our current epistemic practices are protecting are not that of our BAME colleagues but our white/white-presenting colleagues. Whiteness remains an axis of power in our epistemologies.

We need to speak about racial equity and justice beyond mere representation and inclusion.

Language reveals or conceals; it can mobilise or collapse our imagination. And it is up to us to decide what language does. Now it is time to harness the discomfort that this term ignites to do the job we have been pushing backstage for far too long. We need to speak about racial equity and justice beyond mere representation and inclusion.

Our leaders and professional bodies can help dismantle systemic racism by starting a truth and justice project in the healthcare system at large, from education through training to employment and delivery of the service. A genuine transformation starts with a bold language that captures our imagination for a better and just NHS.

The Longest March: Reflections during the early pandemic

Human contact: do we need it in medical practice?