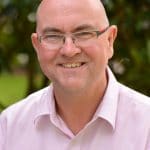 Tim Stokes is a GP in Dunedin and Elaine Gurr Professor of General Practice at the Otago Medical School. Dunedin Campus, University of Otago, New Zealand. He is on Twitter @StokesTim63.

New Zealand doesn’t always appear on world maps but the country has been centre stage during the COVID-19 pandemic thanks to its success in flattening the epidemic curve: as of 21st May we’ve had 1,503 cases and 21 deaths. Here’s my take on New Zealand’s COVID-19 journey to date, its impact on general practice and why New Zealand got it right.

The New Zealand story starts on 28th February when we had our first confirmed case of COVID-19. Between then and mid-March the country saw a steady rise in cases, panic buying of toilet paper and hand sanitiser, the first school case of COVID-19 (at my youngest son’s school in Dunedin) and closure of our borders on 19th March. It was an anxious and stressful time for GPs due to difficulties in securing supplies of PPE, no clear channel to ensure that the Ministry of Health knew, and could act on, what was happening on the primary care frontline and an awareness that flu vaccinations needed to begin in earnest. COVID-19 testing also began — initially though general practice, though concerns were raised early of the need to separate those needing assessment and swabbing from the usual patients being seen face-to-face. Swabbing then became more systematised through the establishment by PHOs (equivalent to UK CCGs) across the country of Community-Based Assessment Centres staffed by local volunteers, including many GPs. Locally we all attended a joint Medical Officer of Health (Public Health), Medical Directors District Health Board (Secondary Care) and PHO (Primary Care) evening meeting which was important in terms of establishing relationships across primary and secondary care early.

The weekend also saw the start of the Jacinda and Ashley double act… Both were at the top of their game in terms of ability to communicate clear actionable advice to all New Zealanders.

The weekend of 21/22nd March marked a watershed for New Zealand. I recall it being one of trepidation that things were going to change here in ways we couldn’t yet see. The number of daily cases went into double figures, there was concern about community transmission and we introduced our four stage alert level system and moved to level 2. That Saturday we all received an embargoed email from the RNZCGP requesting all members to immediately switch to virtual consultations (phone, email or video) with the target to reduce face-to-face consultations by 70%. The rationale being information received from Italy that doctors’ waiting rooms contribute significantly to the community spread of COVID-19. The weekend also saw the start of the Jacinda and Ashley double act: daily briefings to the nation from the Prime Minister Jacinda Ardern and the Director General of Health, Dr Ashley Bloomfield. Both were at the top of their game in terms of ability to communicate clear actionable advice to all New Zealanders.

The following Monday was D-day: GPs moved into consulting virtually with the majority of patients — quite an amazing transformation of practice in the space of three days. Monday 23rd also saw confirmation that the virus was spreading in the community, a move to level 3 and 48 hours to get ready for a hard lockdown (level 4) from 25th March. The country went on a shopping spree, supermarket shelves were stripped bare, and GP practices were inundated with calls for repeat medications. Then the country stopped. And, importantly for general practice, GP consultations stopped too — with the exception of vaccinating patients in their cars for flu. While we run a similar health system to the UK with GPs working as independent small businesses, a key difference is that funding is split 50/50 between capitation and fee for service — with direct patient charges.(1)

So, with fee for service income drying up, practices have been under severe financial strain. On 2nd April the RNZCGP published the results of a members’ survey which showed 67% of respondents had had their hours of work reduced and 7% had been laid off. I work as a GP at a high needs health centre in the city funded through capitation and charitable donations. We offer free GPs consults to a vulnerable population with a morbidity similar to that of a Glasgow homeless clinic.(2) While we have managed the move from face to face to telephone consultations well, using nurse triage, we were concerned that our most vulnerable patients would fare badly during lock down. This in fact hasn’t happened as our clinical nurse leader was proactive in calling them to make sure they knew that they could still call us and access care, including face to face consults — the message was “we are here and we care.”

The difference is the Labour coalition government has made the health of the people, not the economy, its priority.

For the first two weeks of lockdown cases continued to rise, with a daily peak of 89 cases, and we saw its first deaths. As with other countries the worst clusters in terms of mortality have been Aged Care facilities. Then the epidemic curve flattened, we moved back into Level 3 on 28th April and life started returning to the “new normal” on Thursday 14th May — lockdown restrictions being lifted but physical distancing being maintained. GPs are now starting to see patients return to their clinics but with an expectation that they will be seen roughly 50/50 face-to-face/virtual for the foreseeable future.

Like the UK, the COVID-19 pandemic has been a catalyst for significant change in New Zealand general practice. The big questions are: How many of these new ways of working should and will be retained? How can we get the balance right between face-to-face and virtual consults as a way on initiating and maintaining relational continuity of care and providing best care to our patients? Will we see a re-examination of the current GP business model and the primary/secondary care divide?

So how does New Zealand come to be in this enviable position in the COVID-19 pandemic? Well, it’s not because the country is exceptional in terms of health inequalities: it had its own version of Thatcherism in the late 80s — Rogernomics — which left deep and enduring health inequity, particularly for Māori, and the social problems that go with it. Nor is exceptional geographically: a third of the population live in or around the country’s biggest city, Auckland. Its public health system was also ill prepared for a pandemic with chronically underfunded secondary and primary care and an ICU beds per 100,000 population well below the European average. Further, its public health infrastructure in 2016 failed to the extent that 40% of the population of one provincial town caught campylobacter from the water supply, with several deaths.

The messaging has been pitch perfect and consistent from the Prime Minister and the Director General of Health.

The difference is the Labour coalition government has made the health of the people, not the economy, its priority; has been willing to work in partnership with leading epidemiologists and been willing to be transparent regarding decision making and to make its decisions subject to public scrutiny through parliament (epidemic response committee chaired by the leader of the opposition). The messaging has been pitch perfect and consistent from the Prime Minister and the Director General of Health: plan for it; keep it out; stamp it out; manage it and recover from it. We all hope New Zealand is on course to eliminate COVID-19.

Better video consultations with people who have learning difficulties