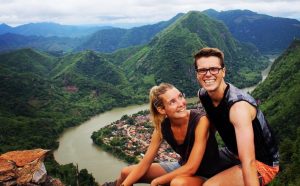 Kirsty Wooff, having spent her foundation years in Glasgow, took an ‘FY3’ year to travel and volunteer in Malawi and Nepal.

Travelling for eight months… A once in a lifetime opportunity. Eight months and nine countries. But what has it done for me? As a person? And as a doctor?

I set off, with my fiancé, at the end of October 2016. My sister gave birth to a beautiful baby boy a day before we left so goodbyes were particularly emotional and, as we boarded the bus to Heathrow, I did wonder – why are we doing this?

We’re both doctors and, having completed our two Foundation Years within the NHS, we were keen for a break. Despite the pressures to ‘get a training number’ and to ‘be a consultant before 30’ neither of us wanted to jump straight onto the career treadmill. Like many of our colleagues we still felt young, we want a breadth of experience before becoming more specialised and, really, what was the rush all about? We wanted time for ourselves. The current training programme isn’t very accommodating for the many of us who feel this way and, as we prepared to head off around the world we had friends preparing to head to NZ for jobs and friends content to take short term or clinical fellowship jobs at home. The lack of colleagues actually entering training was a bit frightening but I think demonstrated a fault within the system and not within the doctors.
So what was it that made us, after only two years of working, want to take a break?

We weren’t running away from medicine; we were taking a break from the NHS treadmill.

The decision was multi-factorial. We both love travelling. We both love exploring new places. We both love meeting new people and new cultures. On the flip side, we both felt knackered from work and the strains of six years at university followed by two years as a junior doctor. We were ready for a break. We both love being doctors. The privilege of helping people at their most vulnerable, the constant interest with different challenges every single day and the contact with so many different people in so many unique ways every single day is amazing. Working as a doctor is stimulating, exciting and rewarding. We weren’t running away from medicine; we were taking a break from the NHS treadmill.

We were off for eight months but we were combining volunteering as a doctor with travelling as a backpacker. Our first three months were spent in Malawi with RIPPLE Africa. Through them we volunteered at local health clinics and a rural district hospital as well as establishing a sexual health programme at the local secondary school and youth groups. The work was both incredible and heart breaking. We faced challenges we couldn’t of dreamed of before; how do you pick which child on the ward is the sickest for the only oxygen port? How do you persuade a rural Malawian that the $1.50 on the bus to the hospital is the only way they might save their child’s life? How do you get the man with the fractured pelvis to the hospital in a land of no ambulances?

Death wasn’t a surprise; it was a day to day reality that every family faced regularly.

The lack of resources presented daily difficulties. Language and cultural differences were another huge aspect of decision making. It quickly became apparent how crucial it was to make decisions with all these factors playing a part. The actual medicine was simple enough; we had next to no access to investigations (other than malaria screening and haemoglobins) and it quickly became apparent that you did what you could with what you had. The question “sick or not sick” became crucial with clinical acumen being vital. The most challenging part for us was balancing societal, cultural and language differences in a world with little resources. Getting patients ‘on board’ with a plan is half the battle for doctors working everywhere but in a country where everything is so different it was a constant struggle. Fortunately, patient expectations were an all-time low. Compared to the, often overzealous, relations of patients within the NHS the expectations of people in Malawi were polar opposite. As soon as you had suggested hospital treatment for someone it was as though you had said ‘they’re going to die’. Death wasn’t a surprise; it was a day to day reality that every family faced regularly. Whilst in some ways it was really refreshing to work somewhere with such low expectations it was also one of the most infuriating aspects: these kids shouldn’t be dying, why are people not fighting for them?

All in all, it was an eye opening, mind broadening experience. The responsibilities we faced were completely different to those at home; no one was bothered about documenting or discharge letters (such an integral part of a junior doctors’ job at home!) yet we were running our own ward rounds, trying to source anything and everything we could for extremely sick people and constantly on call from ‘home’ (our beach chalet on the shore of lake Malawi). Once the local community had heard there were doctors nearby we were called on, at all times of day, for various ailments ranging from simple bruises to major intra-abdominal trauma.

After three months we were, once again, tired. It was time to hit refresh and move on. Road tripping around Uganda and camping in national parks provided a welcome relief, even with dangerous animals roaming around our tent!

From there we headed to Nepal where we spent a month living in a rural village and volunteering at the local health clinic. Compared to Malawi the work was mundane. The clinic sat at the top of a steep staircase on top of a hill… If patients were managing to walk up to us they were generally OK! Again, we faced cultural barriers and differences which were both tricky to navigate but also mentally stimulating.

We have spent our final three months in backpacker world in Indonesia and South-East Asia. It’s been great having no responsibility other than to ourselves; what a treat. It’s hard to shake off ‘real life’ though. Speaking to other people our age who have no career plan and no real-life plan can sometimes make me envious but, mainly, I feel grateful. Not only do I have a job to go back to that I love, I have a vocation. I know it’s a stereotypical argument about medicine being a vocation but I really do feel it: once a doctor always a doctor.

The NHS is at risk of losing this generation of doctors to countries, or jobs, which allow them more autonomy and more respect.

Travelling has given me many things. I’ve seen the world, I’ve met so many incredible people, I’ve got to see so many great animals… I think it’s also helped me realise what’s important to me, as a person and as a doctor. I want to live, and work, somewhere that healthcare is a right and not a privilege. I want to be able to fight for my patients. I want us all to fight for the sick in our communities. I don’t mind working long hours, night shifts and weekends, but I do mind having no respect, no autonomy and no appreciation. The NHS is at risk of losing this generation of doctors to countries, or jobs, which allow them more autonomy and more respect. The training system needs to be more flexible; it needs to allow for young doctors to get a breadth and wealth of experience, if that’s what they want. Working out with your career path shouldn’t be considered detrimental to your career; experience is what makes a doctor and we should be encouraging every doctor to get whatever experience they feel would be best.

As returning home to locum shifts in ED is quickly becoming a reality, it all feels a bit daunting; what will we have forgotten? What will people expect us to be able to do? Will we cope?
Volunteering abroad hasn’t furthered my knowledge of medicine but I do think it’s helped us both develop the art of medicine.

Anyone can follow an algorithm or protocol but good decision making in tricky circumstances is a key feature, I think, of what makes a doctor great. Having had experience of that first hand hasn’t automatically made me a great doctor but, I hope, it’s helped me on my way to one day becoming one.

Why do you want to be a GP? The one question we don’t ask

Why does France seem to be so much better at protecting its population than the UK?

Doctor – I got it out of love and affection.

Migrants in vulnerable circumstances: not a quick fix.

Do you feel confident in meeting the needs of Afghan asylum seekers and refugees? The issues

The dilemma of civil disobedience at a time of Covid