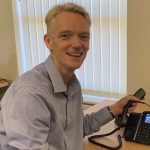 Nick Berry is a GP in Dorset, England.

They say that today’s papers will wrap tomorrow’s chips, but that hasn’t actually been true since about 1981, when they realised the dyes in the ink were a little bit poisonous.

Chips or not, an article in the Financial Times recently caught my attention because it appeared to suggest that family doctors may no longer be needed.1

On one hand, this is truly excellent news. It means that tomorrow, rather than face the maelstrom of demand that usually accompanies each Monday morning, I can go fishing.

On the other hand – what on earth are they talking about?

The journalist, who is also a government advisor on health reform, wrote: “When my son hurt his back badly, I called three surgeries in a panic. Two didn’t answer, and the third told me to call 999.” And “If you’re repeatedly fobbed off, as one of my friends was this summer, you might end up in hospital with cancer – which is where she is now.”

An article in the Financial Times …. appeared to suggest that family doctors may no longer be needed.

Whoa, slow down there, and let’s read those somewhat emotive snippets again. Someone hurt their back, and someone has cancer. These are bad things, and I’m sorry. Hopefully they are both getting better. But don’t we have purpose-built places where people can go to get fixed up when they have an accident, or an emergency? And wouldn’t the friend with cancer have needed hospital treatment anyway? It’s possible that I may not have grasped the full nettle of these anecdotes, but unless we are to start setting bones and delivering chemotherapy in our local surgeries, isn’t it entirely appropriate for hospitals to continue do that sort of work?

“It’s time to stand back and ask what GPs are for”, the piece then proclaims. Well, OK. Except, having framed this question, the author immediately gives us an answer which is completely wrong. They say the two roles of a GP are to be a trusted face, and a gatekeeper to a rationed system.

The role of a GP is, in fact, to deliver the vast majority of the country’s health care. Around ninety per cent of all medical consultations take place in General Practice, according to an often cited independent report by The King’s Fund.2 Ninety percent.

Your GP surgery is who you go to when your new born baby needs checking. When your toddler has a limp. When your child has asthma. When your teenager is cutting their arms.

Your GP is who you go to when you’ve found a lump. When your mother is forgetting things. When your grandfather, late in the day, is taking his final breaths.

Around ninety per cent of all medical consultations take place in General Practice, according to …. The King’s Fund.

The system is far from perfect. There’s always room for improvement. Sometimes there aren’t enough people delivering care to match the demands of the people who need to receive it. And recent swings towards bigger, scaled-up surgeries have presented a particular challenge to the relationships families have traditionally had with their doctors.

But surely this is what GPs are for. Around the country, working in partnerships and practices of every type, their mission is to tend unceasingly to the diverse healthcare needs of local people. And although this is rarely reported in the Sunday papers, there is evidence that they often do it rather well.

I wonder why someone might say otherwise. Could it be – and this is just a wild stab in the dark – because they are an advisor on health reform, and shaking things up a little goes with the job?

With this in mind, I retrieved a crumpled broadsheet from the bin outside the chip shop. Having carefully unfolded it, I found the article and more fully appraised the content. The proposal, it seems, is that GPs should be centrally employed to supervise ever bigger multi-professional teams. Entrusted with the ration book. This might solve problems of access, workload, and fragmentation of care. Although to be honest, it was kind of smeared, and I couldn’t quite make out the part where it explained how.

I noticed though, that something smelled a little fishy, and took it with a pinch of salt.

Fishy indeed. Centralising control appears to be fashionable for those in power – good luck with that when the responsibility and accountability lands squarely at the feet of our politically masters.

How to deal with uncertainty in GP teaching

The Cynefin framework is believed to encourage the perception of existing structures with new eyes, aiding

The realities of hypertension management in Ukraine

General public concern over the adequate control of blood pressure is notably high within Ukraine, possibly