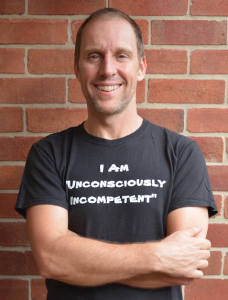 Simon Morgan is a GP and medical educator from Newcastle, NSW, Australia. He spends his spare time writing and playing the ukulele.

Can I take a photo?
Recently, I was in Heathrow Airport when an anonymous traveller approached me and asked ‘Do you mind if I take a photo of your t-shirt?’ I replied ‘Which one?’, thinking of my collection of much-loved, short-sleeved casual cotton tops back in Australia (Tin Tin in Vietnam is a particular favourite).
Looking somewhat nonplussed, she replied ‘Sorry, I meant the one you’re wearing’. I was clad in a black t-shirt with the words ‘I AM UNCONSCIOUSLY INCOMPETENT’ on the front. (I had deliberately worn it for the long-haul flight from Sydney to London so that I wouldn’t be mistaken for the pilot at any point. It appeared to work.) I said ‘Sure, but do you mind if I leave it on?’ I think at that point she regretted initiating contact.

Small world
Actually, that story isn’t entirely true. A woman did ask to take a photo of my t-shirt in Heathrow, and it was that t-shirt, but the rest of the dialogue was fabricated. That said, the real story was pretty noteworthy in its own right. After I actually responded in a far less cryptic manner than described above, the woman explained ‘It’s just that I use that expression in my student teaching all the time’.
I detected a stirring of recognition in my gut (it was either that or the indeterminate airline dessert I had foolishly eaten a few hours previously), and asked ‘Tell me, were you a keynote speaker at a medical education conference in Australia about 12 months ago? I think I know you!’.
She had, and I did — she was an academic from Canada who had given a plenary session on faculty development at a pre- vocational medical education conference in my home town.
Even though I had just spent 24 hours half-circumnavigating the globe, I said, without a hint of irony, ‘Small world!’. She took the photo and disappeared into the food hall.

Unknown unknowns
A colleague had purchased the catalytic t-shirt through the Internet a couple of years previously for the very same reason as my airport acquaintance. As part of a GP Trainer professional development session on the use of random case analysis as a formative assessment tool, we would discuss the concept of ‘unknown unknowns’, colloquially known as ‘Rumsfeldisms’.
Every good educational session needs a framework from which to hang its hat, and ours was the so-called ‘Johari Window’, the two-by-two table of knowns and unknowns.1
The Johari Window is essentially a communication model used to improve understanding between individuals.2

Johari
The origin of the word Johari is worth a mention. I initially thought it was named after a city in India, say, where the idea had been developed, equivalent to the Dayton Peace Accords or the Melbourne Manifesto. It is, however, an amalgamation of the first syllable of the Christian names of its two inventors, Joe and Harry.
As an aside, two medical education colleagues of mine, Wanda and Kerry, were considering the same idea for naming a feedback model they had developed, but I managed to talk them out of it.

Memorably uninstructive
So, we worked up a little skit as part of our presentation where my co-presenter would ask me how I thought the workshop was running and, as he revealed my apparent ‘unconscious incompetence’ about a supposedly disengaged group of participants at the back of the room, we would both unbutton our shirts to reveal the catchphrase t-shirts underneath. It always got a laugh.
On reflection, we may not have taught them anything, but at least we were memorably uninstructive. I mean, who wants to be unmemorably instructive! Or worse still, unmemorably uninstructive?

An effective communication tool
So there seems to be accumulating evidence that the humble t-shirt is effective as a communication tool. So much so, that I am thinking of marketing my own line of consultation-themed t-shirts. How about ‘I’m not ignoring you, this is a diagnostic pause’. Or, for those undergraduate placements, ‘I’m with student’. Imagine the effect of wearing a fluoroscent t-shirt emblazoned with the words ‘Diagnosis or bust!’, or a pastel V-neck stating ‘That sounds really troubling’. But my personal favourite, and I reckon my potential best seller, would be ‘I am comfortably uncertain’.