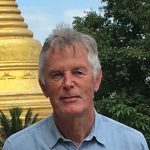 Jim Brockbank is a retired GP. He continues in his role as a GP Appraiser and as an International RCGP Trainer for Myanmar. He also works with the human rights organisation The Helen Bamber Foundation.

As long ago as 1939 Winston Churchill defined Russia as “a riddle wrapped in a mystery, inside an enigma”. For many people this is still the case. The world of the diplomatic service is also an enigma to many of us. “Memories of Moscow” recounts the experiences in the 1980s of Dr Harald Lipman who was Medical Attaché to the British Embassy in Moscow.

In 1982 Dr Lipman spotted an advert in the BMJ for the post of medical officer at the Embassy in Moscow. His mother was born in Russia and he had an interest in international politics. In 1983 he left his NHS practice and Harley Street private practice to be the ‘in-house GP” at the Embassy for more than 5 years.

Winston Churchill defined Russia as “a riddle wrapped in a mystery, inside an enigma”.

This proved to be a time of great change in the Soviet Union and the author refers to ‘history being made around us’ and summarises some of the key events, especially with reference to Gorbachev, Glasnost (openness) and Perestroika (restructuring). These were the dying years of the Soviet empire, which we are reminded was a country of 300 million people, 15 republics and 11 time zones.

The problems of day to day living in Moscow included lack of consumer goods, long winters, and the challenges of the Russian language. This is offset by the author’s recognition of Moscow’s rich cultural life of music, opera, ballet and theatre which he shares with us. We are also taken on visits to palaces, churches and monuments that are a legacy of Tsarist and Soviet history.

We have a glimpse of winter in Moscow where the temperature can fall to -30 degrees Centigrade. Cars always need anti-freeze, people put vodka in the windscreen washers, ice skaters and cross country skiers populate the parks, and men sit on stools and fish through holes in the ice.

We are told the Russian people are warm and welcoming but that at a national and international level this is different and the author becomes aware that his apartment in Moscow, his phone, the car, and the surgery are bugged.

On the medical front Dr Lipman had responsibility for the care of employees from the British, Canadian, Australian, and New Zealand Embassies, some UK language students, the small UK business community and the occasional VIP visitor. He would rarely see a Russian national. He would order drugs and equipment on a monthly basis from The Foreign and Commonwealth Office. Seriously ill patients were medivaced to Helsinki an hour’s flight away. Complex laboratory tests were sent to Helsinki in a diplomatic bag (yet another enigma!).

We are privy to a few case histories, for example, regarding a patient admitted to the All Russian Burns Unit having been transferred to Moscow from Siberia following a tragic industrial accident, and a Lebanese diplomat requiring neurosurgery following a fall. We are also treated to Dr Lipman’s opinion of various Soviet hospitals and medical institutions which he visited as part of his  duties. He describes the standard of care as variable, and that many of the hospitals and institutions were underused. The undergraduate medical course at that time was didactic, the subject matter outdated, with minimal patient contact.

We are told the Russian people are warm and welcoming but that at a national and international level this is different.

At that time medical care was generally a poor quality service and that doctors in Russia had low status, and low pay. During the 1980s when HIV was at its peak, there were no disposable or single use syringes available. Dr Lipman demonstrates the unreliability of test results with the story of the chest Xray film of the male British Ambassador being given to him, which on closer examination proved to be that of a female!

Dr Lipman’s legacy from his time in Moscow has been to develop The Tushinkaya Trust which has resulted in the development of a modern children’s hospital, the first school of paediatric nursing in the Russian Federation, and scholarships for young paediatricians to attend Great Ormond Street Children’s Hospital, London for three months. Additionally he formed the Moscow Medical Association (MMA) to develop peer group support for expat healthcare staff, including lab technicians and scientific attaches, and establish relations with Soviet medical colleagues. 50% of royalties from this book are donated to The BEARR Trust, which assists with the care of deprived adults and children in the former Soviet republics.

The challenge that all memoirs face is to keep the story interesting and not simply be a recounting of fact. This is a long read at 341 pages and there are sections which will be of interest to immediate family, friends and colleagues but probably not to the general reader. The annotated chapter headings and the excellent index make it a useful resource and reference for readers interested in Russia and it’s healthcare system at a key moment in the history of the Soviet Union.

Lockdown and the Future of General Practice

Palliative Care: Is it time for healthcare professionals to talk openly about psychedelic therapy?