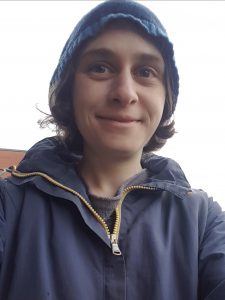 Naomi Adelson is a GP working in Birmingham.

We probably make an unusual sight at the side of the river: four 20-something women, carrying mud-spattered rucksacks, scrambling over the wall and into the refugee camp. We edge our way along the narrow path towards the group of men sitting around a campfire. They greet us warmly and we ask if anyone is sick. Several people have colds and we distribute cough syrup and vapour rubs before proceeding on under the bridge. The path is crammed with grimy tents. These house the luckiest of the 300 people living here; others huddle on exposed mattresses on the ground. Feeling the cold January air pinch my face, I wonder how anybody can sleep with no protection from the elements.

This is the smallest of the three camps. The others, built on muddy patches of grass, each hold about 700 people – mainly single men, but also families with young children. Sanitary facilities consist of four portaloos and two urinals. Rats dash between rubbish heaps and into tents. We meet people suffering from various ailments: coughs and colds, scabies, muscle aches, toothache, wounds and burns. Mental health problems are not often discussed openly, but are evident from the deep cuts on a forearm and the barely-suppressed tears in a young man’s eyes.

Yet most alarming is what is outside the camps: the hustle and bustle of a normal day in Northern Paris. People go to work, squeeze on to public transport, relax in cafes. We are less than five miles from the Sacré Coeur. Crossing a road, we arrive in a leafy city square and visit a dainty patisserie for lunch. I struggle to comprehend the difference between these adjacent worlds. How can such destitution exist in a rich country in 2020?

Those left outside face not just poverty, but hostility. Police patrol the area, trying to discourage refugees from settling.

The people seeking asylum in Paris typically come from war-torn or impoverished countries such as Sudan, Eritrea, Somalia or Afghanistan. They have undertaken life-threatening journeys and most have already passed through much of Europe. Asylum claims in France can take years to be completed. Some may be placed in accommodation whilst waiting, but there are thousands more people than places. Those left outside face not just poverty, but hostility. Police patrol the area, trying to discourage refugees from settling. The camps are periodically cleared without warning; tents and possessions are confiscated.

I am volunteering with a group named MARDi (Medical Aid for Refugees and Displaced people).° We visit the camps daily, offering first aid and signposting to appropriate services. The refugees are entitled to state-funded emergency care and to medical and mental health services in specified clinics around the city. In reality, accessing care can be incredibly difficult. Patients typically spend hours waiting, without being informed about whether or when they will be seen, and may be turned away if they do not speak fluent French. MARDi volunteers undertake basic triage to reduce the burden on services, provide addresses for each clinic and write referral letters in French. Some more urgent cases necessitate an ambulance call; this brings more obstacles. Volunteers tell of numerous arguments with ambulance drivers, for example being told that cases of suspected basal skull fracture or diabetic ketoacidosis are not emergencies. This hostile attitude deters many refugees from seeking healthcare at all.

I also feel a constant unease, knowing we are only treating the symptoms of a complicated and widespread problem.

I enjoy working with MARDi and admire the dedication of the volunteers who have spent months building relationships with these vulnerable people. But I also feel a constant unease, knowing we are only treating the symptoms of a complicated and widespread problem. Bandages and throat lozenges are all very well, and sympathy and respect are undoubtably worthwhile. But we are not providing lasting solutions or preventing any future problems.

The hostile environment towards people seeking sanctuary is increasingly evident, not just in Paris but throughout Europe. When previously working with a first aid team in Calais I saw evidence of police regularly assaulting homeless refugees and confiscating their shoes, clothing and sleeping bags. In the UK there are reports of refugees being refused registration at GP surgeries,° women are too scared to seek antenatal care for fear of being charged° or deported, and Parliament has removed guarantees° that unaccompanied minors in Europe can be reunited with their family members here. These examples are only the tip of an enormous iceberg.

We all have our own views on who should be granted asylum in Europe. Our governments clearly want to avoid creating incentives for people to move here. But can we ever excuse deliberate hostility towards other human beings? If we don’t want people seeking sanctuary with us, are we doing anything to address their reasons for fleeing? No matter how many times we turn a blind eye, the situation remains here on our doorstep.I find hope in the caring actions I see people taking – showing sympathy, giving practical help or lobbying the authorities. Kindness is sadly lacking in our laws and systems, but it can still be present in our individual attitudes. If we want a happier society we must hold on to compassion.

[…] provides first aid to the homeless refugees there, and wrote about my experiences in this article Caring for refugees in Europe – can kindness overcome hostility? | BJGP Life. I returned for a longer trip in August 2020. Read on for an account of my […]

The impact of BJGP’s research on clinical practice