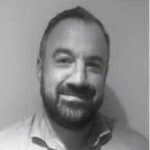 Giles Hazan is a GPwER in Chronic Pain, working in the South East of England.

Iwoke to find myself stuck somewhere between sleeping and waking, a liminal zone, a threshold between dream and reality.

As I drifted in and out of consciousness my dreams came with me, events and people on the ward merged into a hallucinogenic thriller my confused mind had created. A mystery, where events in the present affected not only the future but also the past. With hindsight, my choice of watching the film ‘Tenet’, with its themes of time travel and a race to avert international disaster the night before going in for brain surgery may not have been ideal.

Earlier that year I had been diagnosed with a pituitary adenoma and, after careful discussion with my team of endocrinologists and neurosurgeons, decided to have surgery to remove it. Working as a doctor for nearly 20 years, latterly mostly in chronic pain clinics, allowed a degree of professional detachment, a coping mechanism perhaps common to doctors as patients.

Generally considered a safe surgery, I expected to be in hospital for less than a week and discussion with the anaesthetist has reassured me that I would likely only need simple analgesia after the first few days. Of course, I should have considered the additional ‘risk magnifier’ for medical personnel. Based on personal experience, this suggests that if anything can go wrong with a procedure it generally will if the patient is a member of the medical profession.

Sure enough, during surgery I had the rare complication of a CSF leak and then, to add insult to injury, developed an even rarer and aggressive ‘Ventriculitis’, (no, I hadn’t heard of it before either) an infection like meningitis but more focussed within the ventricles in the brain. This caused headache, confusion, photophobia and a fever with rigors which came on just as they were attempting to remove my lumbar CSF drain, which was a tad inconvenient.

I admitted defeat, welcoming the opioids with open arms.

I need to qualify that rather dry description of a ‘headache’ here as I really don’t think that does it justice. It was an excruciating pain rendering me unable to speak, open my eyes or tolerate even the touch of my wife’s hand. A pain that made me so desperate for even a moments respite that I considered asking to be put back under a general anaesthetic. This led to the clinical team throwing the analgesic section of the BNF at me and I was given increasingly more heroic doses of oxycodone up total of 80mg in 24hrs (the equivalent of 160mg of morphine) on top of paracetamol, naproxen and dihydrocodeine.

To my embarrassment now, I remember as the pain built, I considered my experience of managing chronic pain in the community. I practiced breathing exercises and even remember reaching for my phone to play a meditation before the onset of rigors meant I couldn’t press the buttons and I admitted defeat, welcoming the opioids with open arms.

I don’t honestly remember much of the next 48hrs, my conscious level fluctuated as the antibiotic equivalent of Domestos was poured into my veins to battle the infection. I subsequently rallied enough to emerge into the psychedelic combination of opiate effects plus infection, including delirium, hallucinations, sedation and mood swings that were played out in a screenplay that would have done Christopher Nolan proud.1,2,3

As the antibiotics continued to do their work, I was able to start to cut down the doses of opiates using more of an ‘as required’ approach and once again reacquaint myself with reality. It was during this phase, shortly after a chunky top up of oxycodone, that I experienced my next opiate effect. Lying in my hospital bed, the pain fading and drifting towards sleep I was filled with an overwhelming sense of wellbeing, finally all was well with the world and the next few hours were spent in a state of near total bliss.

This may well have been because I was feeling better but, writing this now, I recognise in that afternoon a near perfect example of opiate induced euphoria. How wonderful it was to be out of such an awful pain and how scary it was to consider it returning. This creates the perfect pharmacological carrot and stick of motivation to continue to use opioids and I now realise how easy it would be to reach again for that release. It is no surprise to me that up to 6.5% of surgical patients end up becoming long term users of opiates.4

One might think as doctors our knowledge and experience might afford some protection from outcomes like this. In fact, the likelihood of developing a substance misuse disorder during our career as doctors exceeds that of the general population.5 Perhaps this should come as no surprise when considering that psychological health plays an important part in predicting those who are more likely to experience substance misuse. In early 2018 Mind surveyed 1,066 GPs in England and Wales and found 40% reported mental health problems including depression, anxiety, bipolar disorder, or post-traumatic stress disorder. Add this to similar rates of burnout, depersonalisation, and low sense of personal achievement you have a powerful driver for not only the descent into addiction, with opiate use coming second only to alcohol, but subsequent relapse.6,7

Critically we also have privileged access to a supply of controlled drugs. It is sobering to note that primary care doctors are the most common source of opioids for non-medical users.8 But perhaps this access to drugs accounts for why both GPs and anaesthetists top the list of ‘high risk’ specialities likely to develop an addiction.

We must … discuss … all of the effects including the euphoria and the more psychedelic effects that may … increase risks of subsequent dependence.9,10

It’s easy to vilify opioids but there is no doubt that they are highly effective analgesics in the management of acute pain. But we must be honest with both ourselves and our patients and discuss not only the analgesic effects but all of the effects including the euphoria and the more psychedelic effects that may reinforce use and increase risks of subsequent dependence.

When it comes to surgery, informing people about the potential side effects before they need opioids as part of a pre-op process, as well as guidance about reducing and stopping them after any procedure, is vital. Early identification of risk factors such as negative pain appraisal, catastrophisation, anxiety and depression and the use of interventions to equip patients with self-management skills can reduce post-operative use of such potentially dangerous medications, and ultimately avoid the drift into dependence and addiction.11

My experience in this opiate induced liminal zone has enabled me to reflect on the threshold I crossed between doctor and patient. It has provided a valuable insight into the impact of the powerful drugs that we use to manage pain and has been a humbling experience that has emphasised my own fallibility and vulnerability, not just despite, but perhaps because of, being a doctor.