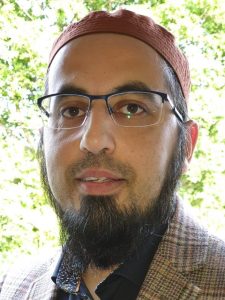 Samar Razaq is a GP in Buckinghamshire

I remember as a child going through a phase when I would often get episodes of blepharospasm. This was in the days when the threshold for seeking medical advice, particularly in the Asian community, seemed considerably higher than it appears to be now. As a result, most such ailments were treated with methods that could perhaps come under the banner of “generational wisdom”. In the case of blepharospasm this involved tearing off a small piece of paper, licking it with your tongue and sticking it on the flickering eyelid. To this day I have been unable to figure out what gave a saliva smeared piece of paper its botox effect but, for me, the treatment worked every single time. Other than walking around looking like an idiot, I do not recall any obvious side effects of this remarkable treatment.

Other than walking around looking like an idiot, I do not recall any obvious side effects of this remarkable treatment.

Admittedly, now that I work as a GP, I do not recommend this treatment technique for blepharospasm to any of my patients. Not because I don’t think it will work, but I rather they didn’t lose faith in their doctor. In this era of evidence based medicine I would need at least a study of some credibility to be able to recommend such a treatment modality. Otherwise what is the difference between a doctor and an elder dishing out generational wisdom?

Recently an article on BJGP Life drew a lot of negative attention for recommending a treatment of chronic fatigue and myalgic encephalitis. It was written by a doctor whose daughter, having tried multiple failed treatments, improved after the treatment. The author was naturally, as a result of her experience with her daughter, convinced of the effectiveness of this method as she had seen it work first hand. As a result she recommended it against NICE guidelines and had become a practitioner of it. The comments section, however, was less understanding. The general view was that the treatment was not recommended by NICE, had no evidence that it worked and was a petty excuse to defraud desperate patients of their money. But is it too different from what could happen in the clinical rooms of those offering ‘approved’ treatments?

Let’s take the example of painful bladder syndrome or interstitial cystitis. This is a poorly understood condition with no clear underlying aetiology. Symptoms can include bladder pain or pressure, problems urinating and pelvic pain. There are no consistent findings in people with this condition and essentially it is a diagnosis of exclusion once other known causes of bladder pain and pressure have been ruled out. Once the diagnosis is established, we have the issue of having to offer treatment for it. Treatment options include antidepressants, pentosan polysulfate (PPS) and neuromuscular blockade. A recent Cochrane review (see reference below) found that there were not enough high quality studies available to be able to confidently say that any of these treatment modalities work. Moreover, it is unknown what the precise mechanism of action of antidepressants or PPS is in the treatment of this condition. In summary, painful bladder syndrome is a condition for which there is no consensus on the diagnostic criteria, no consistent findings amongst sufferers, no evidence for any effective treatment options and a lack of clarity how the treatments being used actually work. Yet this condition continues to be diagnosed and treated in the community and specialist clinics all over the country (NHS and private establishments).

One of the phenomena of modern medicine has been the creation of illness where there was previously none recognised.

One of the phenomena of modern medicine has been the creation of illness where there was previously none recognised. A patient who does not fulfil the criteria for diabetes may now have pre diabetes; if the threshold of TSH has not been crossed they have subclinical hypothyroidism; if all the symptoms of coeliac disease are present but the antibody test is negative we can call it non-coeliac gluten hypersensitivity. “Over-diagnosis” or “over-labelling” brings with it the expectation of treatment and in many cases there is no clear consensus what the treatment should be. In these scenarios we are driven by our desire to help our patients in the hope that we can alleviate some of their suffering. In such situations how much (and in what ways) does it really matter whether the treatment is pentosan polysulfate, or a piece of saliva drenched paper?

What does the future hold for the relationship between a patient and their GP in the UK? (Kieran Sweeney Prize runner-up)