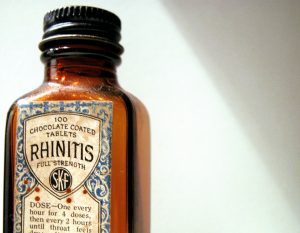 A great deal of medicine is education.  The title ‘doctor’ is derived from the Latin word for teacher.

Before getting that title, I spent three years working as a TEFL (Teaching English as a Foreign Language) teacher: first in Spain, and then with VSO in Eritrea. I’m no expert educationalist; but I learnt enough to see that a 1:1 interaction is often not the best way to impart complex information.

In general practice, I see patients exclusively on a 1:1 basis, in short 10 minute bursts. I have to explain and discuss difficult concepts, and am often left frustrated that I can’t do this justice in a rushed 10 minute consultation. Many of my patients share this frustration.

It’s all the more frustrating, because I often have almost-identical conversations (let’s say lifestyle change in diabetes) numerous times each week, with different patients. I’ve often wished I could have all those patients sat together, and instead of delivering six sub-optimal 10 minute explanations, I could spend an hour doing it really properly, and have more in-depth discussion.

But the increased time we’d have wouldn’t be the only advantage. What I learnt from teaching – whether it was classes of 8 businessmen in Barcelona, or 80 school students in Eritrea – is that learning in groups provides the opportunity to learn from each other; for ‘horizontal’ as well as ‘vertical’ (top-down) learning. It is active learning: the concepts are brought alive through being discussed.

So when I read about ‘shared medical appointments’ on the RCGP Bright Ideas website it rang a whole heap of bells. Here was a way of consulting that sits between the 1:1 appointment and a group education session (where a teacher addresses the group, but only as a group, not individually).

And so, I wrote to Rob Lawson, the article’s author, who set up a group of like-minded clinicians.  Now, a few months down the line, we’ve tried them in our practice.

We invited patients to have their COPD reviews in a group.  Patients were seen in the waiting room, on a Saturday morning. They were given refreshments on arrival, and signed a confidentiality agreement. The practice nurse and pharmacist collected key data: FEV1, their MRC dyspnoea score, smoking status and sats, and put all this information on a white board.  Then I came in, and proceeded to consult with each patient in turn.

The nurse facilitated these conversations, directing me and other patients as appropriate. When an issue came up that had relevance for numerous patients (as it invariably did – smoking, spacers, nebulisers, inhaler technique, pulmonary rehab, rescue packs) I spent longer discussing it, often using the whiteboard for explanations. Other patients with relevant experience chipped in.

Patients really liked it, evidenced by their evaluations (see below), but more importantly, by the practice grapevine – conversations with receptionsts, overheard things in the waiting room. A common refrain was how much they’d learnt, and how good it was to know that other people were in the same boat. The appointments themselves felt warm and supportive, and there were lots of laughs; a breath of fresh air for us clinicians. 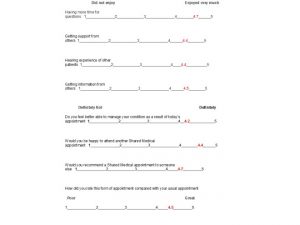 Some great things happened, during and after the appointments:

We had an unprecedented uptake in pulmonary rehab classes. Like many practices in deprived areas, we’ve previously had very low uptake in these classes (and the same is true for DESMOND for diabetes). There was some great peer-peer learning and motivation: a patient saying how good they feel for stopping smoking/doing exercise/using a spacer is much more powerful than me as a doctor saying it. Connections formed between patients – e.g. two patients who previously didn’t know each other, but walked home from the appointment together, and agreed to give pulmonary rehab a try together.

Patients got answers to questions they didn’t want to ask themselves. For example, a patient raised panic attacks in the context of COPD: we know these are a big issue for patients with respiratory disease but it’s often not raised by either patients or doctors. We were able to go into this in detail, and it was clear that this resonated with many other people in the group. This was extremely powerful in normalising what they were going through, and how to seek help. There were challenges of course, mainly logistical: space (we can’t use the waiting room during the week), staff time, recall systems. These are surmountable, but need thought if we are to extend the use of these consultations. In terms of resource, we expect that these should be at least cost neutral (compared to current ways of working) once we get teething problems out of the way.

Our biggest concern as clinicians before doing these, was confidentiality. However, in common with the experience of other countries, patients didn’t raise any concerns about this. We only discussed things that patients themselves volunteered, so the patients were in control of what was disclosed. In fact patients were surprisingly candid.

Where next? We plan to continue piloting these, and diversify into other disease areas. Diabetes and childhood asthma/eczema are the next areas we’re trying, and I’d like to try them in chronic pain in the future. Elsewhere, they have been used for a huge variety of conditions (acute and chronic), with great success.

If you are a clinician interested in finding out more, or trying these for yourself, the UK SMAC group now has 40 members from primary and secondary care. We are holding a meeting in Sheffield in October, and new members are welcome. If you are interested, please get in touch by leaving a comment, or by emailing Rob Lawson, the secretary of the UKSMAC group: roblawson@core-health.com. 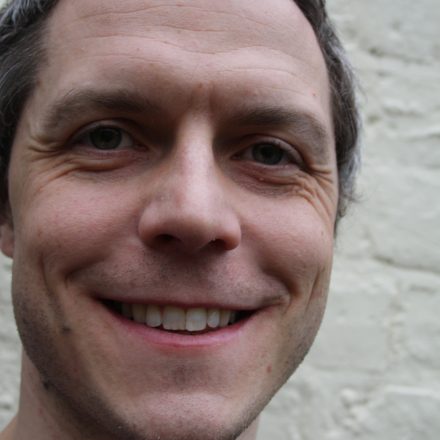 Jonny Coates is one of the First5 GPs that’s not in Australia. He works in Newcastle upon Tyne.