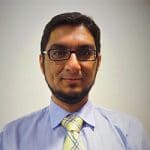 Asif Yaseen has been a GP and trainer at the Boulevard Medical Practice for 16 years, and is Chair of PGPA federation in Calderdale.

Most of us are actually fairly traditional in the way we work, hence the need to coax us to new ways of working, usually with a little piece of silver here or there. The PCN contract is a recent example. Previously there was the PMS premium. From the formation of the NHS, GPs have always needed incentives to change.

Newcomers over the last few years offering their online video based services were decried as being unsafe by many, and their workers supposedly at risk from the organisations with three letter acronyms. The juggernaut of General Practice was unmoved.

That is until COVID 19 hit. Within about two months things had swung the opposite way. The shackles of CQC and GMC fear were broken. Everyone was having to change and we could justify it because of the urgency of the threat. What was frowned upon was now acceptable, and had in fact become the standard by mid 2020.

This genie is not going back in the bottle.

This change was needed and going to happen eventually anyway. The support in infrastructure that would otherwise have been slow, together with the need for common sense solutions in the face of the pandemic, helped overcome the inertia. The old adage that ninety per cent of the diagnosis lies in the history, was proven true as we managed to consult remotely.

This genie is not going back in the bottle. For a start, COVID 19 is far from over. Patients also seem very accepting of the changes. Not being bound, sitting in a surgery waiting an unknown amount of time, but instead carrying on with their day waiting for a call, seemed much better for most. There were some who had withdrawals symptoms from the “doctor drug”, but even most of them got over it soon enough. The government were told that there comes a point in a crisis where people will feel fatigued from the limits put on them, but in reality most of our patients have trusted us and understood the new ways.

Will we go back to how it was? I doubt it. Will there be a swing slightly back to the old ways once every one is vaccinated and the world begins to resume some semblance of normality? I suspect so. After all telephone medicine is without doubt harder for that missing information where ten per cent or so of the diagnoses are found. The knack of it takes effort to learn and time to become comfortable with. Despite that, telephone consultation will still likely form a greater proportion, if not the bulk, of our working day going forward. Videos and photos are almost certainly here to stay also.

I envisage … having a few face to face clinics a week with the rest of the appointments being remote.

I envisage each of us possibly having a few face to face clinics a week with the rest of the appointments being remote. Working from home hasn’t proved a hit with most people though, as we seemed to prefer the ambience of the practice to working in pyjamas at home, but it is still now an option for some.

Electronic fit notes, prescriptions and information leaflets can be sent with a quick few clicks. Laptops, smart phones and webcams are available for patient & doctor. Patients are often supplying not only their own blood pressure monitors, thermometers and scales but now also oxygen saturation monitors too.

This pandemic has changed General Practice forever, albeit in a direction we were probably headed in anyway, but at a pace never seen before. As a profession we should be proud of how quickly we adapted, and not afraid to keep the good that has come out of this difficult time as soon as it passes.

“The 4 W’s + 1” An easy primer for having difficult or advance care planning discussions.