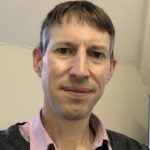 Martin Benfield is a full time GP partner and trainer in Hertfordshire. He has a particular interest in consultation models and helping trainees improve their ability to consult more affectively.

Watching numerous trainee videos for RCA preparation I could see how, from a patient perspective, the doctor’s questions and explanations often appear random. There was rarely transparency in the consultation. I pictured the doctors’ contributions like a spray of paint from a flicked brush, unlinked blobs from start to finish: questions about random symptoms; what do you think, then moving on; the cause could be this or that; I’m going to do this test, and treat with that; but look out for these random symptoms.

Reflecting on my own consultations I realised I was doing something that wasn’t in a consultation model. I was throwing out big blobs during the history that were flowing down through the rest of the consultation like a water droplet passing through the differential diagnosis discussion, the management plan, and the safety net. Those blobs were transparently asking about the symptoms of specified conditions, treating the patient as a more equal partner in the data gathering. By making the questioning more transparent the explanation for the possible diagnoses can then link directly to what the doctor and the patient have uncovered together. The investigations and treatment options will fit with the patients understanding of their situation, and the safety net will make sense.

From a patient perspective, the doctor’s questions and explanations often appear random.

Below is a simplified example of some of the transparent questions used with a patient I consulted with:

This system can be used for systemic/wider enquiry. The examples, if used, can be selected based on the case in front of you:

Using this system the differential diagnosis discussion is more like a summary of the findings than new information. As with breaking of bad news the patient will be working the likely diagnosis out for themselves before it is handed over. This will particularly help if there are strongly held ideas or concerns.

The patient will be working the likely diagnosis out for themselves before it is handed over.

The safety net becomes a reminder of the red flags already described during data gathering, rather than some random symptoms. People are more likely to remember things if they understand them. No longer will patients leave the consulting room having had symptoms of cancer or cauda equina thrown at them out of the blue as the last thing they were told.

With ‘Transparent consulting’ the doctor makes it clear why the questions are being asked. The answers are more reliable if the patient understands their relevance. By the time the thread, started during the history stage, has passed through the diagnosis discussion, management plan, and safety net the patient will have a much better understanding of their situation, including enhanced treatment compliance and improved memory of the safety net. Patient satisfaction should be higher as it is a more patient involved way of consulting.