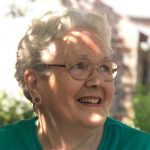 Madge McClary, “at the age of 71” is not yet fully retired and continues to work as a BMAT Part 3 Examiner for Cambridge Assessment and as a English Language teacher in Cambridge.

Every one of us has a story. Some stories are happy, some more interesting than others whilst many are complicated and chaotic at times and some, just plain tragic.

With a bit of luck most stories only begin to end when we reach our declining years. At this point in someone’s story many of the achievements which were recognised in the early chapters are forgotten or deemed irrelevant. This, despite the fact that the final chapter is often a time when older people remain fit and active for much longer and form the backbone of many Charities and groups of volunteers.

Moreover, many of the ‘What About Us’ generation left school at fifteen and have had a working life that spanned over four or five decades. Many continued to work past retirement age and some still do. In the 1960s, it was customary to have a Saturday job whilst still at school. At age thirteen, they would have started paying National Insurance and, even now in their seventies, many might not yet be fully retired and are still paying income tax on modest earnings and pensions: a whopping fifty or sixty years later.

Many …. left school at fifteen and have had a working life …. over four or five decades …. in their seventies many might not yet be fully retired and are still paying income tax.

Driven by statistics, political posturing and speculation, the discrimination and prejudice against the elderly is cemented even further, a case in point being the current debate about Health and Social Care funding. Warning the general public about how the percentage of older people in the population is set to rise and issuing predictions concerning the increase in costs associated with caring for people who are living longer, adds more fuel to a growing level of resentment. Yet, there is little or no reference made to the tax revenue still being collected by HMRC and which would surely give a fairer and more realistic picture of the actual economic situation. Likewise, no-one seems to challenge the costs of the bureaucracy involved at local, regional and national level in administering the health and social care provision for the elderly in need.

In the meantime the elderly continue to be viewed merely as a financial burden on the State and consequently less worthwhile members of society. A society that is only too keen to draw attention to other areas of prejudice. There is a minefield of political correctness to navigate nowadays so as to avoid offending anyone and everyone but such sensitivity by and large seems to exclude the elderly.

Older people get ‘tutted’ at for being too slow; treated with exasperation for being hard of hearing; mocked endlessly on YouTube for being forgetful or repeating themselves and for not being sufficiently ‘woke’ or tech savvy: the latter being a dangerous assumption to make. Our ‘arthritic’ fingers may not fly over the laptop keys or smartphone buttons as quickly as they once did but we were at the forefront of the office and personal computer revolution in the 1970s and 1980s. We might choose not to subscribe to multimedia platforms and social media but that does not mean we are blissfully ignorant of the wide range of technology and its many and varied functions.

The older generation, should not have to face the level and types of prejudice that is endemic in society especially at a time when we inevitably become caught up in the Health and Social Care system. On a recent visit to my GP’s practice I was summoned by my first name only and thereafter this was substituted by ‘dear’ and ‘sweetheart’ although those two expressions are infinitely more preferable than ‘my lovely’ or worse still ‘dearie’! I was not asked how I preferred to be addressed.

I was summoned by my first name only and thereafter this was substituted by ‘dear’ and ‘sweetheart’ …. I was not asked how I preferred to be addressed.

I recall one particular occasion when attending a hospital out-patient appointment. During the consultation with the specialist clinician, the manner in which I was spoken to was so patronising and insulting that I felt myself getting quite angry. I bit my tongue and instead looked carefully around the room. At which point I was asked what I was looking for. To which I replied “The child you are talking to ……..”

Once we enter our seventies, we do not become children again and should not be treated as if we were. Neither should we face any form of discrimination or prejudice based on advanced age or declining physical condition, especially from the medical profession who are bound by the four prima facie principles of ‘respect for autonomy, beneficence, non-maleficence and justice’.

It is not unreasonable to expect a level of respect and consideration following a lifetime of work and contribution to the public purse. It is entirely reasonable to be allowed to enjoy a few years of well-earned retirement without the discrimination and prejudice that many are faced with in old age.