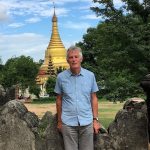 Jim Brockbank has retired from General Practice. He continues in his role as a GP Appraiser and as an International RCGP Trainer for Myanmar.

Since the coup in Myanmar the junta have killed and detained medics, attacked, ambulances, destroyed medical equipment and occupied hospitals. Covid is now sweeping the country and as Physicians for Human Rights have stated ‘the human rights emergency of the coup is morphing into a public health disaster’.1

Under Aung San Suu Kyi’s government, Myanmar was one of the first countries in south-east Asia to roll out vaccinations. This has ground to a halt and less than 4% of the population has received one vaccine dose. As discussed in this journal Dr Htar Htar Lin formerly the Director of the Myanmar Immunisation Program who led Myanmar’s Covid Vaccination Campaign has been arrested because of her involvement in the civil disobedience movement.2 Her detention comes at a time when Covid is ravaging the country. She has been found to be positive for Covid infection whilst in prison.

Medics in Myanmar need our help.

Medics in Myanmar need our help and a bike ride in the form of a notional relay from the UK to Myanmar, onward to the UN General Assembly in New York and returning to London was devised. Riders cycled a chosen distance in their locality, or elsewhere if they wished.

This has now been completed and a total of 21,600 miles was achieved. Fifty cyclists took part and this included people from as far afield as New Zealand and Austria, members of the Myanmar diaspora here in the UK, and the serious to the casual from the many organisations supporting medics in Myanmar. This endeavour inspired many to donate and £21,000 has been raised so far.

The funds raised have been passed to The Brighter Future Foundation charity to support healthcare in Myanmar. Funding for urgent medical equipment and supplies has been sent to a hospital in Kachin State, a poor area with the additional burden of many thousands of refugees. In addition money has been sent to fund an antenatal clinic for the poor in Mandalay.

The bike ride has symbolised concern for our colleagues and the people of Myanmar. The junta continues to arrest medics at a time when Myanmar needs them most. Oxygen is only supplied to military hospitals, and stocks from hospitals and community clinics have been seized.

The true data on the impact of Covid is difficult to obtain but it is thought that some 4000 people a day are dying from Covid in Yangon alone.3

There is still time to make a contribution!

In some small way this money will help, for example to buy oxygen concentrators (£650), refillable oxygen cylinders (£150), pulse oximeters (£25) and antibiotics. But it will not be enough – there is still time to make a contribution!

How to develop creativity in thinking and discover new things