Hay Mar Aung is from Myanmar. She currently works as an Emergency Medicine Registrar in the UK.

My country was trying to cultivate the tree of democracy and freedom when on the 1 February 2021 the military coup, justified by false claims of election fraud, took us back to the dark days of military rule.

Thousands of civilians went on strike and protested all over the country, the initiative for this came from the medical professionals. All doctors are aware of the Hippocratic oath but a growing number of physicians have come to feel that the Hippocratic oath was written long before the advancements in bioethics and is inadequate to address the realities of the modern medical world.1 It makes no mention of such contemporary issues as the ethics of research or a doctor’s societal responsibilities. Doctors in Myanmar still believe in the spirit of the Hippocratic oath but is it still applicable in the current crisis that we face in Myanmar?

In India, in the Charaka Samhita, a sanskrit text on Indian traditional medicine, physicians could refuse to treat people who were not favoured by the king, which shows that oaths were a product of the sociocultural factors of the times they were created.2

Doctors in Myanmar decided to start the strike known as The Civil Disobedience Movement (CDM), and more than 80% of doctors got involved. They are not from political backgrounds but are committed to supporting the next generation in their struggle for democracy and feel unable to obey this illegitimate government.

Some doctors are collaborating with the private sector and non-government organisations to provide essential health care to people. Unfortunately, the military have detained thousands of medical professionals and volunteer staff. Many of the medical staff cannot stay in their homes and have to move from place to place to avoid being arrested by the military. 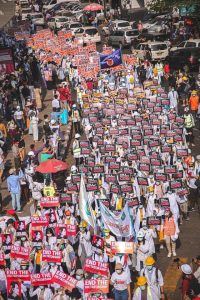 COVID-19 cases began to rise sharply in early June 2021 and there was a significant increase in the number of COVID-19 related mortalities. This is a catastrophic humanitarian crisis and the people of Myanmar are suffering because of the impact of both COVID-19 and the coup.

Military terrorists are using COVID-19 as a bioweapon, they are blocking the supply of medicines that are used to treat COVID-19, as well as taking away the oxygen supplies of the private and volunteer organisations. On 16 July, one private hospital in Myamar had to shut down their emergency department because the military had cut off the oxygen supply.

The Junta has stated in the newspaper ‘We have enough oxygen’ but this is untrue, they are blocking the supply of oxygen. Two colleagues of mine from medical school died in ITU at one of the government hospitals because of a lack of oxygen.

The people of Myanmar, including my family and relatives, are desperately searching for oxygen. On 13 July Yangon General Hospital was overwhelmed by desperate people needing oxygen treatment but the hospital didn’t have enough of a supply or enough staff. The police fired shots above the crowd to drive them away.

The healthcare system is at breaking point, some medical professionals are hiding in the jungle. Providing primary medical care is a real challenge.

The healthcare system is at breaking point, some medical professionals are hiding in the jungle.

Through webinars doctors in the UK, especially those from Myanmar, are giving moral support to their colleagues in Myanmar, and are helping by sharing their experience for the home management of COVID-19 and some common medical conditions. They are also trying to find ways to supply oxygen concentrators but are concerned that supplies might not reach the needy civilians and that doctors involved would be detained by the military.

Some Myanmar doctors here in the UK have significant feelings of guilt because as medical professionals we do not feel we are able to effectively support colleagues to provide health care for their communities back home.

Doctors in Myanmar are aware that the international community has expressed concern for our country. In supporting the CDM, they are caught between the duty of care they have for the wellbeing of the communities they serve and the need to make a stand for democracy and freedom in our country.

Read further on the healthcare crisis in Myanmar on BJGP Life

The dream of universal healthcare in Myanmar becomes a nightmare.

Project Empathy. A response to the healthcare crisis in Myanmar.

Myanmar doctors under a military coup in the midst of the pandemic.