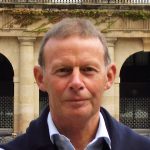 John Brooks is a retired general practitioner with an interest in Medical Humanities.

Today’s younger generation enjoy Harry Potter and Roald Dahl’s books. But my first recollection of reading a novel was as a young teenager when I read John Buchan’s “The Thirty-Nine Steps”. I was enchanted and could not put the book down.  It was some time later that I became acquainted with the other Richard Hannay escapades; Greenmantle, Mr Steadfast, The Three Hostages,The Island of Sheep.

His once popular genre of fiction was described as adventure, but it was also a mixture of romanticism and thrills bordering on the preposterous. Much influenced by Robert Louis Stevenson and Walter Scott his fiction was the precursor to the Graham Greene and John Le Carre spy thrillers. Buchan’s reputation as a serious writer and academic was enhanced by his biographies of Montrose, Sir Walter Scott, Julius Caesar, Oliver Cromwell, Augustus, his Nelson’s History of the War, his other novels, letters and uncollected journalism.1

John Buchan was born in Perth in 1875 to an ardent Free Church minister, the first of six children. He studied at Glasgow University (1892-95) followed by going up to Brasenose College Oxford University (1895-99). During this time he was a member of the Oxford Union Society and engaged by London publishers to continue his periodicals and writing. John Buchan was called to the Bar in 1901, and soon after travelled to South Africa as Lord Milner’s private secretary.

On returning to London in 1906 he entered into partnership with Thomas Nelson publishers, and the following year he married Susan Grosvenor. During the First World War he was appointed director of information in 1917, with access to classified information. Buchan finally achieved his cherished ambition when he entered Parliament as MP for the Scottish Universities in 1927. His crowning achievement was being made Governor General of Canada as Lord Tweedsmuir of Elsfield.2

A diagnosis of peptic ulcer … he was subjected to a gastroenterostomy procedure. Surgery was performed in the family home.

In his early 30s Buchan started to have disabling bouts of abdominal pain. A diagnosis of peptic ulcer was made. After no improvement on bland diets he was subjected to a gastroenterostomy procedure. Surgery was performed in the family home and the operation lasted over two hours. It was described as a “short circuiting operation.”3 Sadly, it did not help his symptoms and he had recurrent stomach pain for the rest of his life. This was the era before selective vagotomy , the discovery of Helicobacter pylori in 1982, (winning the 2005 Nobel Prize) and Triple therapy.4

In Canada the tenure was for five years, from 1935-40. Buchan worked hard on official duties in the morning, tried to exercise by walking after lunch and continued his writing in the evening. He was a popular Governor General and made many new friends. These ranged from President Roosevelt who visited him in Canada and entertained him in New York, to Eskimos and Missionaries at their northerly outposts.

Towards the end of this time Buchan completed his last adventure novel “Sick Heart River” which is regarded as his best and most profound work of fiction. It was a story with a real spiritual quality combined with a physical battle against the elements. The protagonist is Sir Edward Leithen, a lawyer and MP, who just happened to have many attributes of the author. He is sent on a mission to find a French Canadian banker missing in the frozen North of Canada. Perhaps his success in life had not been fulfilling. Death held no fear after he had been given a prognosis of incurable Tuberculosis before he started out on this final journey. Leithen enlisted the help of two brothers who were half Scottish half Indian, Oblate Fathers and indigenous Indians in his quest to find the banker.

Soon after this book was completed John Buchan had a stroke which resulted in a fall onto his bath. He was found unconscious and required three neurosurgical interventions. He died several days later at the age of sixty five. There followed three days of national mourning in Canada and an outpouring of public and private sorrow and admiration for this much loved writer and politician.5

“Oh, you’re a GP? When are you going to start seeing patients?”

Ode to my GP colleagues

Hannah Weston-Simons shares an ode to her GP colleagues

This is Going to Hurt: Reflections for medical training