Niamh Scally graduated from Norwich Medical School in 2013 and completed foundation training in Manchester. She is currently enjoying an F3 year before starting her paediatric training in London later this year. She has an interest in health inequalities and care of hard to reach groups.

Emily Player is a GP trainee on the Norwich VTS scheme. She graduated from Norwich Medical school in 2013 and has completed an academic foundation programme in Norwich. She has an interest in medical education and nutrition as well as migrant health and healthcare for vulnerable groups.

We are both junior doctors, feeling helpless and frustrated by the current refugee crisis we decided to travel to Calais to help in whatever way possible with this crisis on our doorstep. We used our annual leave and boarded the Eurostar for the one hour journey across the channel.

We arranged volunteering through the ‘Refugee First Aid and Support’ group on Facebook. We booked our accommodation in the local youth hostel where we met fellow volunteers, arranged lifts to camp and recruited more volunteers including student mental health nurses and dieticians to our medical team.

As undergraduates we had both volunteered in an orphanage in Kenya and later, on elective placements worked in developing countries providing healthcare at a basic level. Now we volunteer in France, there were no ‘grown ups’, and a distinct lack of authoritative presence, with the exception of the police vans which guard and intermittently blast tear gas across the camp.

The days go rapidly, like in the NHS there is not much time to drink or wee and for this we are grateful as we have seen the toilets. We mostly saw URTIs, wounds, scabies and were often confronted with the symptom ‘all over body pain’. We are still unsure if this is due to the cold and damp conditions people sleep in, the malnutrition, the fatigue from ‘trying’ all night or if it is somatisation of the mental pain they suffer everyday when contemplating their situation – this bottleneck they have arrived at here in Calais, twenty miles across the channel from their goal of a better life in the UK. ‘Trying’ itself is an incredibly dangerous activity; one refugee died ‘trying’ in the 5 days we were in Calais. 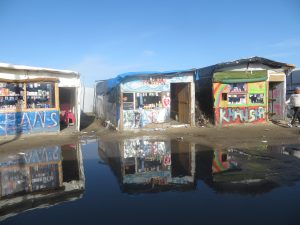 We were seeing around 200 patients a day when all three caravans were up and running, which solely depends on volunteers. We referred a handful of patients a day to the Le Passe clinic; a service ran by the government hospital in Calais. MSF had been running a similar service until the beginning of March, when their contract expired and their main efforts were relocated to Dunkirk. Examples of cases we referred to Le Passe included febrile children, a non-weight bearing unaccompanied 16 year old child who incurred a police brutality injury, a head injury inflicted by a local fascist group that requiring suturing and a 65 year old Syrian man alone on the camp complaining of palpitations, clinically in AF with oxygen saturations of 88%.

As healthcare professionals along with the refugee’s working as translators we treat numerous tear gas injuries, the dietician was able to give advice on refeeding syndrome to refugees on a hunger strike and together we refer on average 10 unaccompanied children to the youth team a day. The youth team, also volunteers, ensures the children have food, shelter and phone credit, they offer emotional support and a safe place to be during the daytime. They also provide information on staying in France and seeking asylum or expediting their application to the UK as vulnerable minors.

We couldn’t comprehend that there are children alone in the camp; other volunteers reassure us that there are often elders and friends looking out for them, but this doesn’t reassure us, this situation is not normal for anyone let alone a child. It is not normal to run away from tear gas. They are incredibly vulnerable to exploitation. More must be done by the EU governments to ensure these children are being protected. As one of the translators eloquently put, “we are living in the jungle but we are not animals”.

Brexit and statins: a tale of scepticism