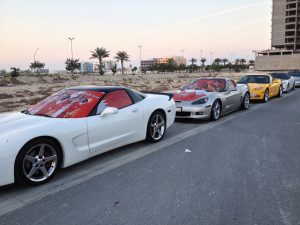 I admit that Slazenger’s cat is a red herring, but my wife was in a rail carriage a while ago, close to a small group of friends in earnest discussion. One was trying to refer to the paradox of Schrödinger’s cat, but couldn’t quite remember the name, so it came out as Slazenger’s cat, which has remained within our family folklore hereafter. But the cat that explains global warming is owned by a friend, a mathematician rather than a quantum physicist. They were faced with the perennial question – what to do with the cat when they go on holiday?

Our friend here in Bahrain flees home to Canada for the summer (well, Canada does not reach 48°C in August). Mr Tibbles never goes out of their flat. So a fairly routine problem of care you would think? They have an additional problem. Should one just leave the air conditioning on continuously for 6 weeks, risking it breaking down when they are not there, thus killing the cat through heat exhaustion? Their Arab helper (whom they employ to wash their cars) will care for the cat. He is competent, although illiterate. So they give the helper a key. At the helper’s request they lock all the internal doors except for the room with the cat. The helper turns on the air con every morning when the cat gets fed, and turns it off every night, when the outdoor temperature will go down to the low 30°C. All should be well.

Except of course it isn’t. The air con in the cat’s room breaks down just as they are leaving for the airport. Fine, put the cat in another room and let the helper know. But the helper has no phone (and is still illiterate). So my friend’s children rapidly draw diagrams and maps of the layout of the flat with large arrows on walls leading a path to the cat’s new abode, a room with functioning air con. And of course my friend spends the summer in the same state of suspended belief as Slazenger, Schrödinger, whoever.

But this rather shaggy tale explains why this part of the world is not going to cut back on its carbon emissions any time soon. I am sitting writing this with the air con on. It’s a few degrees cooler today, only 43°C. We turn the air con off when we are out, to give it a rest,

but there’s no way we could live by day or sleep by night without it. But, hey, energy from oil powered power stations is so cheap out here. We don’t get an electricity bill – it’s not worth it, it’s just bundled up into the rent because it’s as cheap as chips. (Well, considerably cheaper than chips to be accurate.) And our lush green apartment gardens would be dry and dead in days without the unending power hungry efforts of the local desalination plant – well it rains four days a year and there are no rivers in Bahrain – where do you think the water comes from? Oh, and I haven’t mentioned our apartment’s two 500,000 litre swimming pools. Desalinating water for both of them would take about 28 car petrol tanks of fuel, enough to drive from the UK to New Zealand (although I wouldn’t advise trying it).

As I look out of my window over the blue waters of the Gulf and the squat square rooves of my neighbours I can see plenty of jet skis and high end cars but no solar panels. (I didn’t even know they made a five-litre Jaguar until I came out here.) So the Middle East won’t be giving up its reliance on fossil fuels any time soon. And what of the rest of the world? Despite what I have seen of refugee camps in this region and slums in African townships, poverty in most parts of the emerging world is reducing overall. And to what does the emerging world aspire? To a low impact organic recycled utopia, or to air con, MacDonalds and five litre Jaguars? I’ll leave you to guess.

I love a line our daughter wrote on her website: “when we throw something away, where do we think away is?” We make rather feeble attempts to live a low-impact life that is actually impossible as an ex-pat in the Middle East (and in any case is trumped by our air miles travelling home a few times a year.) And the west is still obsessed with “growth”. Actually the west is all grown up and just a bit too big. Should we not be obsessed with stabilizing our planet? It’s our way of life that needs to become more resilient, not our GPs. Grown-ups putting on weight is not healthy and it’s time we attended to our planet’s BMI.

This is really interesting – especially where you mention the reliance on air conditioning. The lack of water in your area also sounds concerning but hey, global warming right? Really interesting, thanks!