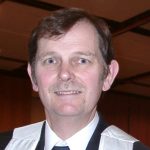 Henry Tegner is a retired general practitioner living in Wiltshire. For thirty years he was a partner in a practice in south east London and was a trainer and course organiser for the Lewisham Vocational Training Scheme.

Barry Monk was appointed a consultant dermatologist in 1987. He retired from the NHS in January 2020. He was not idle during the Covid-19 lockdown, and spent much of that time researching and writing this excellent book.

His interest in patient safety has been stimulated when he heard an inspirational lecture by on the subject given by Sir Liam Donaldson in 2001, not long after the tragic death of Wayne Jowett who had been given vincristine by intrathecal injection in error. He tells us that ‘there has been a failure to give patient safety the prominence it deserves, and that is why I have written this book’.

There has been a failure to give patient safety the prominence it deserves.

The thirteen chapters give a broad coverage of the failings and fragility of individuals and organisations in the National Health Service (NHS), as well as an informative account of the demise of the postmortem in hospital and the regrettable loss of the great learning opportunity that the clinic-pathological conference afforded to students and doctors across the scale.

The early chapters in the book draw comparisons between the problems that still beset the NHS and the earlier appalling safety records of the nuclear industry, air travel and the railways, and contrasts the ways in which these have been addressed. There was a consistent tendency to attribute blame for accidents upon – usually low ranking – individuals. Pilot error was a frequent conclusion drawn by air accident investigators, and basic mistakes by technicians resulting in radiation leaks from nuclear power plants. Regarding the revolution in aviation safety it was noted that ‘muddled and competing inquiries do not reach the truth’ and once this was established a reorganisation of how air crashes are investigated resulted in a transformation of the situation.

The NHS, on the other hand, ‘seems to lurch relentlessly from one catastrophe to the next’. And what a litany of catastrophes is offered to the readers of ‘Lifeline’. Why has the NHS not experienced an equivalent improvement in safety standards as have other industries? The answer would seem to lie in conflicting priorities and interests between clinicians, managers, and politicians. There are appalling examples of dishonesty, injustice and bullying, and accounts of situations where self-advancement takes priority over standards of care and safety. Too often the meeting of government-imposed targets takes precedence over quality of care as Dr Monk shows us with such impact in his account of the scandal at Stafford Hospital and the findings of the public enquiry chaired by Robert Francis (Chapter 9).

Too often the meeting of government-imposed targets takes precedence over quality of care.

The tragic case of Dr Hazida Bawa-Garba, found guilty of manslaughter four years after the death of one of her patients ‘caused outrage in the medical profession, particularly among junior doctors’. She was seen to be ‘a convenient scapegoat on whom to pin the blame for the shortcomings of the service’.

The annual appraisal of all doctors and the five-yearly cycle of revalidation was the direct upshot of the Harold Shipman fiasco. Many doctors will share Dr Monk’s misgivings about these processes: he notes that in his last appraisal he had to give evidence that he was up to date in several activities including Fire Safety and Manual Handling and Lifting that are ‘hardly relevant to ensuring that I am not a mass murderer’. These onerous and time-consuming activities imposed upon doctors have never, so far as I am aware, been demonstrated to improve patient safety as the GMC was so keen to impress upon the public that it would.

Onerous and time-consuming activities imposed upon doctors have never …. been demonstrated to improve patient safety.

The chapter entitled ‘The Trial of the Century’ makes for gripping reading. It details the activities of Dr John Bodkin Adams, the first British doctor to stand trial for the murder of a patient. Bodkin Adams was a single-handed practitioner at a time when medical practice was quite different to what it is now with ‘few effective treatments’. But he was well liked and received dozens of legacies from patients, many of whom were elderly widows.

Referring again to the subject of appraisal and revalidation, Dr Monk suggests that – given the prominent role of wills in the cases of Shipman and Bodkin Adams – in their place the GMC might have been better merely to ask doctors each year whether they had been in receipt of a legacy from a grateful patient. The chapter highlights, once again, the ineptitude of the legal profession in the way in which the trial was conducted, and of the GMC at the time of the trial and in its aftermath.

There is so much more packed into this book and it is difficult to do it justice in a brief review. I would, finally, urge all readers to give due attention to the several pages of notes at the end. There are some real gems among them!