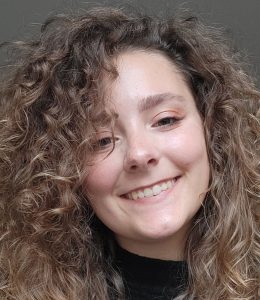 Ivy Mitchell is a student at James Madison University (USA). She is studying health policy on the OPUS programme at the University of Oxford.

Andrew Papanikitas is deputy editor of the BJGP. He is on Twitter @gentlemedic

Kate Raworth’s “Doughnut Economics” is concerned with the question at the heart of economics: what to do about scarcity, but also with an equally profound basis for economics (attributed to the ancient Greek writer Xenophon no less!): how to budget for a household. The household here is all of human society within the finite limits of planet Earth. Raworth conceives of the problem as a doughnut (the American kind with a hole in the middle). The inner ring represents the needs of humanity. The outer ring represents the limits of human interference that the planet can sustain without damage. How might we ensure that in a world of limited resources, every person has enough (the inner ring)? An economy existing outside of this ‘social foundation’ ring for all its people would signal those goods are properly distributed and that the economy meets basic human needs of the individuals which live in it. However, Raworth’s model is concerned beyond the human needs -hence the ring aimed at addressing planetary needs. This ecological ceiling signifies the rates of consumption which our planet can support. Staying within the outer ring is sustainable for the plant overall. An economy must exist in the area in between the two rings if humanity is to flourish. Fulfilling human needs while still satisfying the planetary needs. It is a delicate balance; we cannot meet our basic human rights without stress on the planet, but overconsumption results in unnecessary stress on the environment.

The household here is all of human society within the finite limits of planet Earth. Raworth conceives of the problem as a doughnut (the American kind with a hole in the middle). 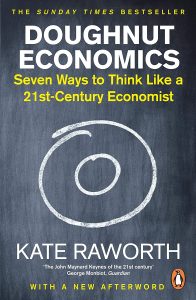 Raworth aims for a dramatic reframing of economics, throwing out the neoliberal (free markets take care of themselves) thinking which historically dominates the discipline. For Raworth, the tools of economics are not only flawed (the models are influenced by physics and engineering rather than biological systems), but ill-suited in addressing the issues of climate change and distribution. Measures for economic success are often centered around growth, whether it be gross domestic product (GDP) or price measures such as the consumer price index (CPI). Raworth deems both unfit. Instead, she opts to base economics in the state of human and planetary wellbeing, arguing for measures of balance rather than growth.

We find it impossible to overstate how important this last element of Raworth’s work is. The rewriting of economics from a picture of success defined by growth to one shaped by balance within a fragile ecosystem requires adoption of a mindset that is alien to classical economics. It may not be quite so alien to the 21st century reader, whether they be a student of social policy or a family doctor. In the past century, we have asked a great deal of economics. In particular, we sought to solve health inequality, environmental pollution, and gender equality. Despite the active role these aspects play in our economy, popular indicators of economic success do nothing to effectively measure their importance in our lives. If we cannot properly visualize the problem, we have no effective way of solving it. Solutions such as carbon taxing and the subsidization of green energy have gained some traction in the lessening of the impacts of climate change.

The rewriting of economics from a picture of success defined by growth to one shaped by balance within a fragile ecosystem requires adoption of a mindset that is alien to classical economics.

Raworth argues that growth should not be the ultimate goal for a thriving economy. The shift in mindset which she advocates revolutionizes how we think about economic success. The very idea that it might be possible to expand our rate of consumption indefinitely without consideration for the limits of resources or the effect on others’ wellbeing and the environment (economists call such factors externalities when they do not feature in transactional costs) is a simple matter of hubris – an act of arrogance that precedes disaster. Anyone can understand the reality behind the limits of consumption, so why do we continue to define success by this myth? Balance between the wellbeing of individuals and the planet is a much better indicator of how the economy is doing.

Raworth’s quite revolutionary model (no pun intended) can come across as simplistic. By contrast, she urges economists, policymakers, and citizens alike to think of the world in a more complex manner. For instance, the poorest of every economy clearly exist on the inside of the social foundation ring. They are also harmed by activities that go outside of the environmental ceiling. For example, low-income individuals around the world live in environments affected by pollution and other environmental damage resulting from the demand for consumer goods by the wealthy. Somehow it is also hard to compute that even in affluent societies there is inequality such that individuals are outside the doughnut. Is this a problem with the model or with society? Trying to think on a global and a local scale in terms of human needs and human desires as well as the effects of meeting these, as well as offering alternative goals for economies and frustration that global markets have become ends rather than means… is itself disorientating and difficult. Raworth’s new ideas in economics ‘dance on the page together’ but we are left thinking that, ‘Doughnut Economics: the well-choreographed musical’ is a life’s work.

Raworth hits on the largest issues in the way of achieving a healthy economy, readily invalidating the pedestal on which we have places the one-dimensional measurement of GDP. This is mirrored on a smaller scale by the way many small businesses aspire to become big businesses. Raworth is a testament for the need to progress our economic thinking. Time has changed and we need new tools if we are to think like 21st-century economists and behave as 21st century citizens.

Against the grain: a celebration of general practice