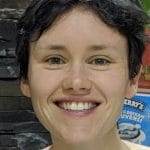 Victoria Hodges is a GP at the University Health Service in Sheffield and Academic Training Fellow at the Academic Unit of Primary Care, University of Sheffield.

I first read Born to Run 10 years ago. Back then I was firmly of the belief that running was only worthwhile when chasing down a ball. I’d tried jogging but found it painful, boring and frankly couldn’t see the point. By half way through the book my excitement to hit the road was uncontainable and I went straight out and doubled my previous longest run. Running was transformed from a slog to a joy.

Running was transformed from a slog to a joy.

In recent years, pregnancies and illness have taken their toll and I’ve lost some of my enthusiasm. When the first lockdown narrowed our horizons and limited our options for entertainment, I was surprised and delighted to hear old friends who have never previously been athletically inclined hitting the streets to pound out some frustration and spend some time away from their loved ones! So, I decided to return to Born to Run to see if it could re-ignite my passion.

Born to Run introduces the reader to the Tarahumara tribe who live a reclusive existence in Mexico’s Copper Canyon, largely cut off from the outside world. The Tarahumara, also known as Raramuri or ‘those who run fast’, have a tradition of running long distances of up to 200 miles at a time for inter-village communication and transportation, as well as for recreation and competition. They cover these distances wearing a style of minimalist sandal. They seem incredible, almost superhuman: performing seemingly impossible feats of endurance for fun. Here is the central theme of the book: that they are simply doing what humans are designed to do.

The book describes the ‘endurance running hypothesis’ which suggests that humans evolved as persistence hunters. Our bipedal forms allow us to vary our breathing patterns when running independently of our strides, whereas four legged animals are obliged to breathe with every two paces. As a result, humans can chase prey for hours or days until the animal literally drops with exhaustion. There’s some persuasive anatomical evidence to support the theory that we evolved to be runners, for example, humans have large gluteal muscles, much larger than are necessary for walking, and much larger than our ancestors Australopithecus or the modern great apes.

The plantar arch of the human foot has an elastic spring function which generates energy for running but not for walking. As well as potentially providing evidence for our evolution as a species, this complex arch is also key to another of the book’s themes: running injuries. The author Christopher McDougall’s own attempts to run long distances had been beset by injury and he turned to the Tarahumara’s style for ideas on how to run injury free.

You might just start to believe you were born to run and once you believe that, there’ll be no stopping you.

As running shoes became more padded and complex in their design in the 1970s and 80s, the rates of running injuries started to rise. As every good bridge builder knows, arches become weaker if you provide support from below. When Nike et al provide cushioning for our soles and arch support, they are in fact undermining our foot’s own structure. What’s more, thickly padded soles remove our foot’s connection to the ground, allowing us to run with poorer form due to the loss of feedback that direct contact provides. If you take the shoes away, all runners naturally revert to a Tarahumaran-style upright, short-stepping form with a mid-forefoot strike which makes best use of the body’s inbuilt shock absorption features and reduces the risk of injury. Indeed after training in the Tarahumaran style, McDougall manages to complete a 50 mile race through the Copper Canyon.

Whatever you think of the science behind it, McDougall’s infectious enthusiasm and consummate storytelling make for an engaging read and provide just the dose of escapism required for these dire times. What’s more, you might just start to believe you were born to run and once you believe that, there’ll be no stopping you.

Featured photo by Free to Use Sounds on Unsplash